When Random Acts supporter Amie Linscott discovered a new community cleaning group, she wanted to ensure their first clean-up would be a success. Amie joined the group and, with funding from Random Acts, donated trash-grabbing tools to make picking up trash easier.

The group, called Nipomo Clean Sweep, is devoted to making the Nipomo, California, area cleaner. Amie found the group on social media and was drawn to the idea of beautifying her community.

Then, her daughter Becky introduced her to Random Acts. Becky encouraged her mother to apply for funding through our kindness acts program. Inspired by her daughter, Amie contacted the leader of Nipomo Clean Sweep and asked how she could make the biggest impact.

Amie originally thought safety vests and trash bags would help most. But since the street clean-ups are arranged through their county, the county provides vests and trash bags to volunteers. Amie was pleasantly surprised to learn this, but it still left her wondering what was needed most. The answer: garbage “pickers.” 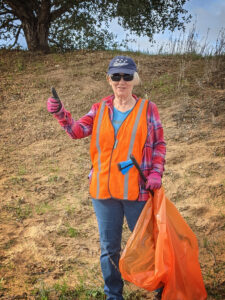 Getting ready for the clean-up with a garbage bag and trash grabber in hand!

The pickers, long tools with a grabbing claw on one end, can be reused for multiple clean-ups. With the pickers on hand, Amie joined the group’s first clean-up.

“We all signed release forms, got on a vest, grabbed a picker and a huge orange trash bag, and off we went,” Amie said.

The group of 15 volunteers cleared trash from two blocks in a few hours. They picked up the most trash in an empty field across from a senior living center.

But the volunteers were most surprised when they found even stranger items, including what Amie called “a really sad looking doll.”

Amie and her fellow volunteers received positive feedback from people driving by. Many waved and smiled as they passed. Some even asked how they themselves could get involved.

With such a show of interest, the group plans to make information signs to display on future street clean-ups.

According to Amie, the biggest upside of her first clean-up was that it made her more aware of trash. Yet, the greater knowledge of how prominent litter is along roads in the United States and elsewhere is also the biggest downside.

“I have now turned my daily walks into my own personal clean-ups,” Amie said. “It actually gives me a great sense of accomplishment as I drive past the areas I’ve picked up.”

Thanks to Nipomo Clean Sweep, Amie and her fellow volunteers have discovered a greater sense of community. Some volunteers have even “adopted” stretches of roads, meaning they commit to keeping those areas clean of litter.

“It’s a great feeling to have this sense of community,” Amie said. “The best feeling is knowing that it made our little town look much nicer. And maybe it will encourage people to keep it cleaner.”

If you are looking to do good in your own community but are not sure where to start, reach out to your Regional Representative for ideas! Or submit a proposal for a funded act of kindness of your own.