Sometimes, war, terror, and persecution force people to leave their homes, their country, and their families. Hoping for a safer future, they arrive in a foreign country. To support refugees in Chicago, IL, Random Acts Social Media Manager Katie Pfledderer connected with the non-profit organization RefugeeOne.

From an Idea to a Kindness Act

With her Kindness Act, Katie wished to find a way to support refugees in Chicago. After some research, she came across a non-profit organization called RefugeeOne. When Katie found their website, RefugeeOne was promoting a coat drive. Katie reached out via email and connected with the Director of Resettlement, Helen Sweitzer. Helen explained that, due to limited storage options, they couldn’t accept any more coats. But the organization was in need of winter accessories such as boots, hats, and gloves.
Katie then spent the next week and a half looking online and in different retail stores. She wanted to ensure that she purchased winter accessories that would endure the rough winters in the city. Katie was able to secure a good mix of winter boots, hats, gloves, and scarves. She then reached out to coordinate the delivery of the items.

RefugeeOne creates opportunities for refugees fleeing war, terror, and persecution to build new lives of safety, dignity, and self-reliance. ​Every year, they serve more than 2,500 refugees and immigrants of all ages, ethnic groups, faiths, and backgrounds. RefugeeOne’s main focus is to assist these individuals in becoming independent, self-supporting members of their new community. 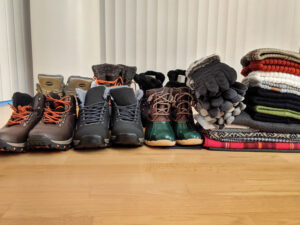 After all of the items had arrived, Katie drove to RefugeeOne’s storage facility to deliver her donation. David Ikundji, a team member, waited for her to accept Katie’s donation.

When Katie traveled abroad, she remembered feeling overwhelmed or “culture shock.” She couldn’t read the signs or understand what people were saying.

“It gave me a deep sense of respect and empathy for those who have embarked on the journey of moving to a new country. When you add in the layer of leaving everything you know and resettling in a foreign land to flee war, terror, and persecution, it’s impossible to comprehend how that must feel,” says Katie.

With her donation, Katie hoped to help support refugees with their transition to a foreign country.

Feeling inspired? To plan your own Act of Kindness, head over to our Acts of Kindness Page or reach out to your Regional Representative for more information.