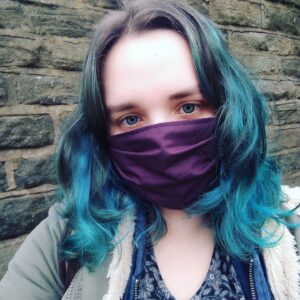 There is something special about getting a letter in the mail, handwritten just for you. It is a personal connection that cannot be replicated by email or a zoom call. Miranda Debenham, Random Acts’ Projects Manager, wanted to spread some handwritten joy to those who needed it. She posted to her social media, offering to write letters to anyone who wanted to sign up. “I had taken part in a lot of holiday card exchanges in [December] 2019, including a huge number through GISH, and really loved getting nice mail,” Miranda said when asked what inspired her letter writing.

Her plan was to write every week until things were back to normal. Although normalcy was a bit further away than expected, Miranda has continued to write to the 20 people who signed up. Occasionally, she will receive a message in return — a note from one of her recipients saying how her letter arrived just when they needed it. “It’s not really something I intentionally did — I never know how long my letters are going to take to arrive! — but sometimes they seem to just hit the spot. Like when someone has just had bad news or is feeling particularly alone.” 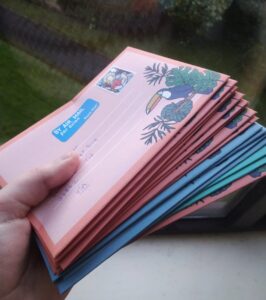 Over the last year, Miranda sent out over 600 letters, notes, and cards to her group. Even when she had less time in her schedule, she would send little notelets to say hello and stay connected. “I didn’t stop because I didn’t ever want people to feel like they’d been forgotten or become less important. And also because writing helps me too.” Miranda has been able to find moments of clarity about her own day when writing about it to others.

When asked if she plans on stopping her letters at some point, Miranda said, “I think it’ll be when we are all allowed back to our day jobs. Which may seem like a strange line to draw, but I think once people are back to having daily social contact via work (or not work, depending), they won’t need letters anymore.”

Miranda has found a lot of her own joy through letter writing as well. Receiving return letters on how she has made someone’s day motivated her to continue reaching out. “Sometimes it feels like a chore, sometimes you don’t want to, sometimes your tongue goes weird from licking too many envelopes. But it’s always worth it. I don’t regret starting this, or every time I’ve pushed through the urge to give up.”

Do you want to do a kind act for someone, but you are not sure where to start? Reach out to our Random Acts Regional Representatives. If you are looking for support for an act, apply to be sponsored. As always, thank you for supporting our mission to spread kindness!