Showing Our Support This Veterans Day

Veterans Day is a holiday in the United States observed annually on November 11, for honoring military veterans, who have served in the United States Armed Forces. It coincides with other holidays including Armistice Day — celebrated in Belgium, France, United Kingdom, Germany, Canada, Australia, New Zealand, Serbia, Romania, Bulgaria, and many other countries — as well as Remembrance Day (sometimes known informally as Poppy Day owing to the tradition of the remembrance poppy) celebrated in The Commonwealth. This holiday marks the anniversary of the end of World War I. Major hostilities of World War I were formally ended at the 11th hour of the 11th day of the 11th month of 1918 when the Armistice with Germany went into effect. 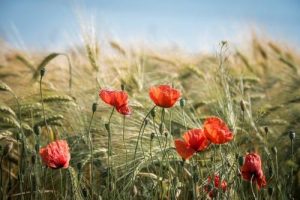 Veterans Day is distinct from Memorial Day, a U.S. public holiday in May. Veterans Day celebrates the service of all U.S. military veterans, while Memorial Day honors those who have died while in military service. For this blog, we spoke with Random Acts’ own Bridget Wenum, HR Coordinator, and former YN2 (Yeoman Second Class) in the United States Navy.

One of Our Own

One of the main things Bridget mentioned was that Veterans Day is about all veterans. “Active duty are veterans too.” As well as making sure to include the National Guard and female veterans. We spoke about some of the biggest challenges that veterans face. There were several consistent concerns. Making the transition from “active duty to former active duty” is difficult, to say the least. “Mental health is the largest issue.” Many studies show that Post Traumatic Stress Disorder (PTSD) is much more prevalent for veterans than for civilians.

What Can We Do?

At Random Acts we hope you will join us in honoring all veterans and showing kindness in any way we can. Whether that is thanking someone for their service who is proudly displaying their veteran status or being a good neighbor to the military family up the street. We can all be a source of support in one way or another.

If you would like to keep up with Random Acts, sign up for our newsletter here. You can help by donating directly to help fund acts of kindness all over the world.