Where Kindness Has No Borders 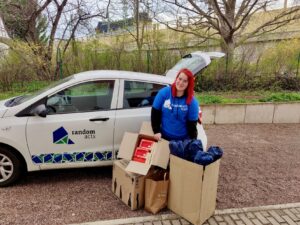 In eastern Germany, an act of kindness brought much-needed donations to a community of refugees from Ukraine.

As with any major conflict, war affects more than just the countries that are directly involved. At its maximum, the number of refugees entering Germany from Ukraine reached 15,000 per day. As of July 2022, nearly one million refugees were sheltering throughout Germany.

Random Acts staff member Krissi Neubauer wanted to find a way to help some of the refugees from Ukraine who had settled at the German border. Krissi did a bit of research and found a list of donations being requested.

The majority of items were non-perishable food such as pasta, canned soup, and baby food. The refugees also needed practical items such as portable chairs and electronic charging supplies. Krissi had some trouble finding items due to overwhelming demand throughout Germany. Prices had risen and stores were limiting the number of items each person could purchase. Krissi found that the best solution was to order many of the needed items online. 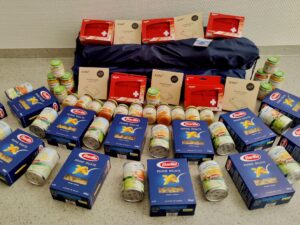 Food and other useful items headed for the donation center

When she arrived at the donation headquarters at a local gymnasium, clothing and toys were already being loaded onto the delivery truck. The Ukrainians accepting the donations were not fluent in English or German, but the language barrier could not keep them from showing their gratitude. “The people there are so happy that people come to them and help them,” Krissi says. “They really appreciate all of the help.”

At Random Acts, our mission is to fund acts of kindness both large and small. Krissi knows first-hand how valuable this mission is. “I know a lot of people are not able to help with donating items even though they want to,” Krissi explains. “Without Random Acts, I would not be able to, either.”

Krissi knew her donation was especially important because the donation center she chose is operated by people directly involved in the war. As she says, “Even if only one person smiles about those donations, it is a win.”

Do you have an idea for an act of kindness in your own community? Random Acts can help with that! Contact your local Random Acts Regional Representative for information on Sponsored Acts or any other help you need to turn your idea into a reality. To help with the Ukrainian relief effort, consider reaching out to organizations such as UNICEF, the United Nations, the Red Cross, or local initiatives in your region.