The Catty Shack Ranch Wildlife Sanctuary, a 501(c)(3) nonprofit based in Jacksonville, Florida, plays home to some 40 different (oversized) feline friends, including tigers, lions, cougars, leopards, bobcats, foxes, and coatimundis. As important as the sanctuary’s role may be in rescuing and rehabilitating its residents from dire circumstances, however, it receives no federal or state funding to remain open and must rely on admission fees and the donations of generous supporters to survive. So when three of Random Acts’ staffers learned about Catty Shack’s situation, they knew they couldn’t sit back and do nothing.

“Catty Shack currently cares for four coatimundis (ring-tailed relatives of raccoons), who are not fond of the cold weather,” HR manager Shahr explained. In order to combat the relatively cool weather over the winter season, the center began construction on a new facility which would keep them warm. “They have nearly finished constructing a 10×10 concrete building which is adjacent to their enclosures,” Shahr added. “This building will have air conditioning and heat, and will allow them to get out of the cold when they choose.”

While construction continues, however, caretakers are forced to carry the coatimundis to and from the center’s medical facility “in medium sized dog carriers”, which are too small for the coatimundis and incredibly cramped. Because budgets were tight, though, there was little caretakers could do.

That’s when Shahr, IT manager Juliana, and senior design officer Sam stepped in to help.

Using Random Acts funding — provided by generous donations from supporters over the years — the three staffers put their heads together and settled on purchasing four heavy-duty divisible kennels, which would not only serve to transport the coatimundis during inclement weather (Florida, after all, is no stranger to hurricanes), but would also fit well into the center’s new facility when complete. After meeting with Catty Shack staff, the trio also decided to purchase a new, large, galvanized steel pool for one of the resident tigers, Spiderman, who undoubtedly enjoyed the surprise gift, as he had been without one for a while.

And while the big cat sanctuary was supposed to be the recipient of this particular act of kindness, Random Acts also received a very special thank you: a tour of the facility, which is expanding rapidly.

Check out our latest kindness venture below and join Random Acts in voicing a collective “…Awwww” at all those adorably fuzzy big cat bellies:

Have your own idea for an inspiring act of kindness? Head over and fill out an act proposal form — we offer financial assistance to those who need it to complete their equally amazing projects.

Diversity and education are both near and dear to the heart of Random Acts’ mission. (Just take a look at what our Class Act program has been doing!)...

Food for Students in Sparta, Missouri 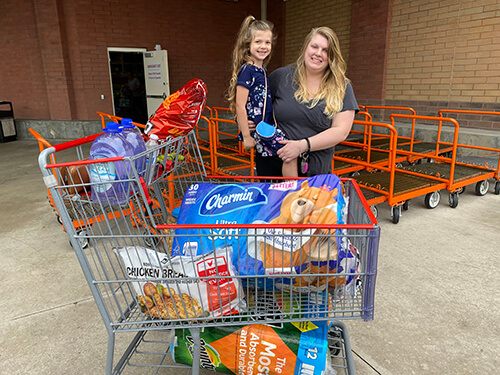 Inspired by the recent uplifting stories she read, Misty Cash connected with a local mother to take her on a much-needed grocery trip.