Random Acts Regional Representative Holly Olsen and her family became an instant family to a small, three-day-old kitten who inspired her to pay it forward and serve other needy kittens!

One day after a fun day out with the kids, Holly’s husband called to let her know that not only were they on their way home but that they were bringing a small, newborn kitten that they found abandoned, umbilical cord still attached.

After a visit with the vet, the family discovered that the fragile kitten was only three days old and would need much TLC, including bottle feedings every two hours, a heated sleeping area, and assistance going to the bathroom.

A lot of time and dedication would be required to care for the kitten, but the family was up for the challenge! 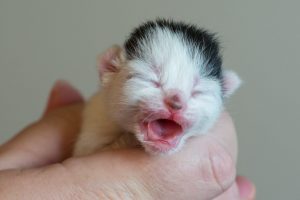 For six weeks, the family worked tirelessly to nurse the kitten, whom they named Abbadon, to health. They had many ups and downs during this process, including the times they struggled to get Abbadon to eat or use the bathroom and when he developed an eye infection and they worried if his eye would ever be functional again. “At every visit, they reminded us he could die at any time,” said Holly. “It was the longest six weeks ever.” Despite the odds, Holly and her family never gave up.

A Time to Celebrate and Pay It Forward

Holly and her family’s work was not in vain! Abbadon was able to push through and celebrate his first birthday! In celebration of this milestone, Holly wanted to pay it forward and help other kittens who have the same plight that Abbadon had, and she found the perfect place in the Bitty Kitty Brigade.

The Bitty Kitty Brigade is a foster-based rescue for orphaned neonatal kittens aged 0-6 weeks who are without mothers and not yet eating on their own in the Twin Cities, Minnesota, and surrounding areas. The organization partners with animal rescue organizations and impound facilities to improve survival rates within the neonatal kitten population. Once weaned, the kittens are typically transferred to another caregiver within the organization where they will be cared for until adoption age, allowing their bottle feeders to take in more littles in need. “It was challenging enough to raise a single kitten,” said Holly. “I cannot imagine bottle-feeding an entire litter, getting them potty-ed and weighed, and then repeating it all again only two hours later. I figure that this group needs all the support they can get in order to best take care of the tiniest of kittens.” 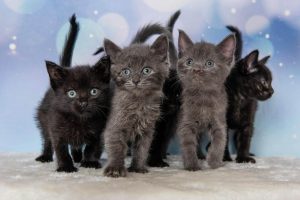 Adapting during A Pandemic

Like a lot of organizations during the pandemic, the Bitty Kitty Brigade is dealing with a lot of unexpected surprises. In their case, it is the sheer number of kittens under their care that has been the biggest hurdle. Holly connected with Joan, one of the Bitty Kitty Brigade’s fostering volunteers. She is currently caring for three kittens, all of which are two-and-a-half months old. One of the three, RooRoo, has a congenital birth defect that results in partial paralysis- her back two legs do not work. Holly picked a few things on Bitty Kitty Brigade’s wishlist to donate to the organization that her family used and needed most when caring for Abbadon, such as miracle nipples, kitten replacement milk, and a safe snuggle. “Miracle nipples were the only nipple he was willing to feed on and probably the sole reason why he survived. The Kitten Replacement Milk is just an ongoing necessity, especially with two-hour feedings. The safe snuggle was how we were able to regulate his body temperature when we weren’t holding him.”

When Holly went to drop off the supplies to Joan, she was excited to be able to spend some time playing with the kittens. She was especially happy to hear that Joan had high hopes for RooRoo’s adoption. “I’m excited to help another generation of kittens get their best possible start to life.”

Do you have a passion for caring for animals like Holly and her family? Click here to learn more about Bitty Kitty Brigade, volunteer or foster, or donate items or funds to help them continue their mission.

Enjoyed this story? Be sure to read more of our Kindness Stories!