I would not call myself a convention veteran, but I am definitely also not a newbie. I have done larger, city based comic conventions like Boston and New York Comic Con. But mostly I have attended small conventions for the TV show Supernatural. The Salute to Supernatural convention in Seattle on February 8-10 was going to be my fifth convention, but no amount of experience could have prepared me for what was to come.

Off to a Good Start

Thursday night and Friday went as planned. I went to a meet and greet with the illustrious Kim Rhodes and Briana Buckmaster. My friends and I sang “Tubthumping” by Chumbawamba at karaoke. I was loving spending time with the guests and with my friends, shopping in the vendor room and listening to panels. I went to bed exhausted but excited to continue the convention.

Saturday morning, I went downstairs for an early meet and greet with Kim and Briana. A Creation Entertainment staff member told us to come upstairs and wait at registration, which did not seem like a good sign. Yes, I knew that Seattle was experiencing the worst snowstorm in 50 years, but I was so sure that everything was going to be fine. Then a staff member came out and told us that because Washington had declared a state of emergency, the entire convention was cancelled. I spent most of the day crying–not necessarily because I was sad, but more just due to an overwhelming amount of emotions. I was upset, and mourning all of the experiences I was not going to get to have. But as the day went on, I felt those emotions shift from despair to gratitude. Every person – the guests, the Creation employees, and most of all, my fellow attendees – did everything in their power to make the best of an awful situation. “This con was so memorable because it hammered home the idea of family don’t end with blood,” said Alyssa, an #SPNSea attendee, on Twitter. “I saw people comforting each other, I witnessed the birth of the impromptu fan-vendor-room-jam. The love and determination to continue on despite everything feeling like it was falling apart felt like coming home. Creation can put on cons for the rest of time, but nothing will ever replicate the loving kindness we experienced at SeaCon19. When everything else fell through, we had each other.”

“We Had Each Other” Maranda rocks the vendor room as Billy Moran accompanies her in the background. Photo credit: Illy/Superinspired67

The “fan-vendor-room-jam” was a spontaneous yet beautiful moment that took place midday on Saturday. Usually, the house band Louden Swain performs an acoustic set in the vendors’ room on the Saturday of the convention. Due to the state of emergency, the band was not technically allowed to play. Therefore, fans gathered together and played Swain songs themselves. It brought music and joy to the air, and just before their finale, guitarist Billy Moran showed up and joined them. “The fact that fans decided that we were going to have this con tradition no matter what was going on was such a beautiful moment that showed how we were going to make the most of a awful situation,” said con attendee Hailee Jordan. “Billy surprising us and showing up in the middle of it, not to lead it, but to participate with the fans, was just the icing on the cake.” Random Acts Executive Director Rachel Miner was actually the only actor to appear on Saturday, due to the fact she was staying onsite. “The Supernatural fandom is unique. I call it the Supernatural Family, as do a lot of people. And we really do try to stand by the fact that we are really about kindness and supporting each other, and a lot of the reason people go to conventions is not just to see the actors, it’s to see each other and spend time with each other,” she said. “I was moved beyond words that people really lived up to that, and looked out for each other. The singalongs and people offering photoshoots, and people holding each other when they cried and coming up with ideas to come together. To me, it was actually one of the best conventions.”

I witnessed another marvelous moment as I came out of the bathroom, wiping away tears. Creation staff members were wheeling bellhop carts into the panel room, stacked to the brim with pizza. It was then that I heard that actor and Random Acts founder Misha Collins had bought over 70 boxes of pizza for everyone still at the convention. This was the moment that made me realize that what we have at these conventions is special. Other actors at other events would just cancel, or maybe say something on Twitter. But at Supernatural conventions, the guests do everything they can – whether that is sending in a video, or playing a guitar, or buying pizza – to make things better.

In the end, though, it was not the guests, but the fellow fans that made #SPNSpeattle the unique convention it was. It was convention history. And sure, it was not the experience I was expecting. But it was still a convention full of friendship, laughs, and memories.

COVID Relief: Home School Meals For A Family in Need 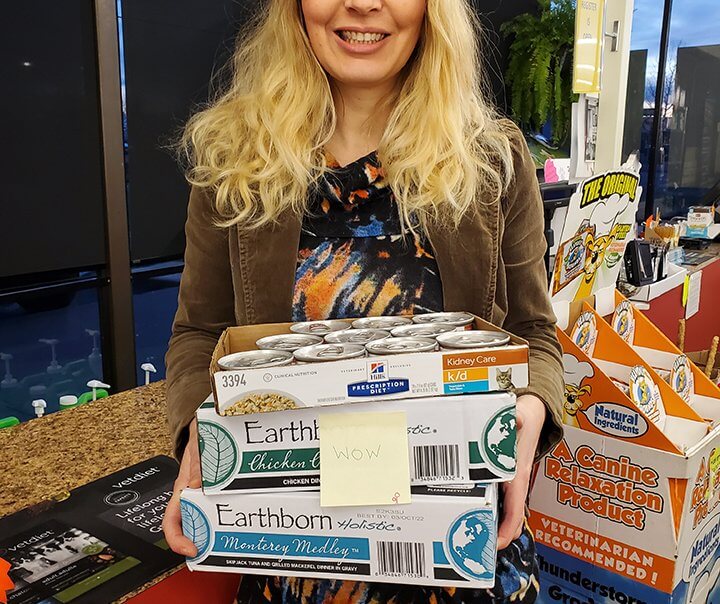 Funding Food for Felines in Need

Kindness comes in all forms, large and small. That is an ethos we embrace here at Random Acts — the idea that something you do could seem small...