Faye came to hear about Random Acts’ Acts of Kindness during a discussion with a friend. Faye told them about another friend, Christopher, and his ordeal following his home being burgled in particularly heartless circumstances. There had been a fire in Christopher’s apartment building, and during the few days the tenants were asked to vacate for the building to be made safe, thieves took the chance to break in.

Having his home stripped of virtually all his belongings and food left a terrible impact. “Christopher struggles with anxiety at the best of times,” Faye explained. “But when he returned to his apartment and discovered what had happened, he became particularly overwhelmed. I wanted to try to find a way to help him feel secure in his home again.” It was then that Faye’s friend suggested contacting randomacts.org 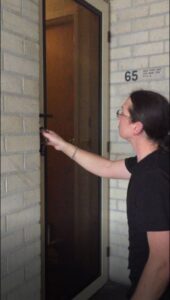 After making sure Christopher was comfortable with Faye’s idea to gift him a security door via Random Acts, the act was put in motion. Faye researched the cost of a suitable door and found one at a nearby hardware store. She then applied for funding to cover the cost. Thrilled when the application was successful, Faye placed the order. After a short Covid related delay, Christopher collected the door and easily installed it himself.

“Thankfully, the one we purchased fit the bill perfectly and was exactly what was needed,” Faye said. She was happy to see Christopher relax a little and begin to put his life back together. “These are terrible times we are living in; it is easy to lose sight of the fact that there are still good and kind people in the world, but this entire experience has restored my faith in humanity.”

Heard of someone who could use a helping hand of kindness? Random Acts operates worldwide, so get in touch with your local Regional Representative to talk about potential acts or ideas for getting involved.